Posted on November 4, 2011 by sherrattsam

I have had a problem with the idea of “tuning-in” for some time, and even more of a problem with “front-loading”. This problem of mine came to a head about two years ago when planning a PYP Exhibition unit and having a bit of an argument with a colleague who kept using the two terms over and over again. For some reason, every time she said them it reminded me of fishing, and then started to make me think of “chumming”! 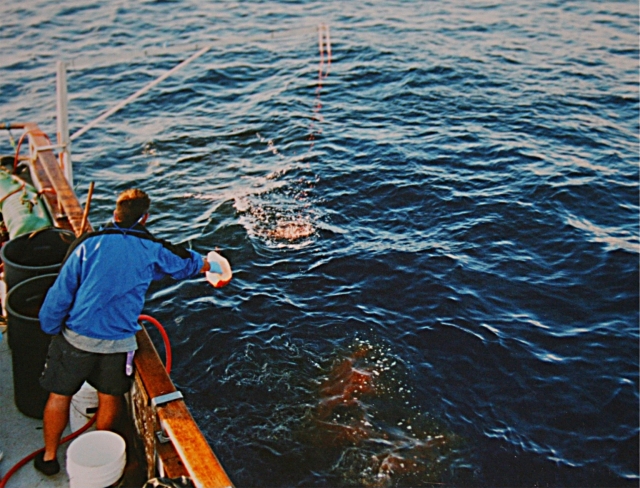 Sometimes I feel as through we treat our students like fish. We throw some things at them in the hope of capturing their interest, then we try and hook them and reel them them in until we’re good and ready to assess them and then, because our unit is usually “over”, we chuck ’em back in the sea and start the process all over again! I think we really end up with the following categories of students each time, the percentages of which change continuously:

To try and help myself get through the planning experience and remain sane, as well as to help my colleague see my point of view, I developed this graphic:

View this document on Scribd

It did help. It helped me to to teach my students in a way that uncovered their real interests more effectively. It helped me to understand that “tuning-in” is not about tuning them in to “our topic” but is instead about us tuning in to who they are as people, as learners and what they are interested in or care about.

But, it hasn’t cured my blues completely. When I was first released into inquiry teaching, I was escaping from Year 6 in an English school. Each year was completely about preparing the students for the SATs. If students showed any worrying signs of having their own inquiries I was simply to remind them of the fact that “it wouldn’t be in the tests”. Wow… when I started to learn about inquiry and working within the PYP framework I was so excited!

However, I have kind of started to feel like that again. I feel as though many of my students real interests and inquiries are ignored or never even mentioned because they are not relevant to the unit we are “doing” at that particular time. I also feel that many topical issues remain unexplored because of the constraints of units and timing. A scary fact that, as far as I know, not a single class in my school has taken the opportunity to inquire about flooding (I work in Thailand). Will it be as powerful to do so in 4 months time when the class is “doing the how the world works unit”? And, of course, that depends on how locked in they are to a central idea that has nothing to do with flooding!

I feel like we’re still kind of kidding ourselves with all our talk of inquiries being “student-driven” or “student-initiated” when they are still really operating within contexts established by us, with the focus set by us and with the duration of the inquiry predetermined.

I have a crazy suggestion for us all to ponder. I wonder if we could experiment with letting students conduct inquiries into things they are genuinely interested in and then, as their teachers, help them to make the academic connections. In a PYP school, this could be as simple as teachers helping students to see which transdisciplinary theme their inquiries are relevant to. If they were looking at flooding right now, for example, their inquiries (depending on which direction they go in) could lead to a better understanding of how the world works, sharing the planet, where we are in place and time, how we express ourselves, who we are and how we organize ourselves. Whoops – that’s all six of them!

I have a student who is crazy about wakeboarding, and massively talented. Here’s a little video of him:

He annoys us all by trying to connect wakeboarding with everything we do in the classroom. “Uh… it’s like in wakeboarding” he says and we all groan!!! But maybe it’s him who has made me feel this way. He’s actually very interested in wakeboard design and has ambitions to open his own wakepark. Would an inquiry into those things cover many of the transdisciplinary themes? I think so.

It’s a bit like putting tags on blog postings isn’t it? When I create a blog posting for my class I often find that the content is relevant to many concepts, many aspects of the learner profile and usually more than one transdisciplinary theme. Imagine if we could teach by tagging too, allowing students to pursue inquiries that really are their own, and then tagging them and helping them (and us) to see that they really are learning stuff!

Apparently, this is one of the ways they do things in Reggio Emilia, and I’m sure it’s only done with younger children where the fear of content coverage is less palpable. But, I reckon it could be done with older kids too, and I reckon that fears about content coverage would turn out to be deeply misguided. It would take a brave leader, an innovative school and some talented teachers to make it work. I would love to give it try!