A Math Inquiry into a Real-Life Kindergarten Problem

This year, I’ve had a hard time getting a handle on Mathematics because I haven’t used worksheets. I haven’t used textbooks. I’ve used some big problem solving ideas, and they’re a little harder to quantify. When I got to reports, I couldn’t whip out my worksheets to see how kids were doing. I had to rely on my observations and notes. It was a lot harder, but worth it.

Our end of year real problem…”We don’t like our iPad stands. They fall over. We can’t set them down to take pictures.” Our problem came from kindergarteners at our school who are so fortunate to have iPads in their classroom. They wanted them to work better though. The covers and stands the kindergarteners were using just weren’t working for them. After talking with our elementary IT facilitator Elif, we decided to have the grade 5 kids work out the problem.

Objective: Design a stand for the kindergarteners iPad that will allow the device to be stable when recording a video or taking a photo.

Step 1: We had two kindergarten representatives come visit our class. They were fantastic. Jaiden and Kieran were able to explain their problem, and the 5th graders listened with attention. They told the grade 5 students: “We need help.” The grade 5 students were ready. Real-life problem.

Step 2: With the kindergarteners’ directive, I drafted a proposal and shared it with the students. We use Google Docs., so it was easy. Deadlines laid out to help them plan.  Here’s the Google Doc. plan. Included are some reporting standards to make sure we stayed on track.

Step 3: Elif and I introduced them to some ideas of industrial design. No, they didn’t need to know this in grade 5, but it made sense with the project and why not. After watching a video about how ideas come about and move into design, students came up with a list of what makes a good design…especially for the iPad:

From their list, we realized the students had gotten it. They were ready to dig in.

Step 4: Students needed to design their stand with pencil and then on the computer. We wanted them to start with pencil to get some ideas out before they were consumed by the computer program. They got into their own groups and set to work. Listening in, I heard a lot of great conversation incorporating design elements naturally. There was talk of shapes and angles, which was a relief as this was an intended geometry project.  The kindergarteners hadn’t been happy with the way their own stands didn’t have enough ways to angle, so this was a big topic among the groups. A lot of collaboration and communication happening.

Step 5: The exciting step for these tech savvy kids…Sketchup. Google Sketchup, which was already on our

computers, is a great 3-D design program. We watched a video together, and the kids were off. I was still catching up trying to learn the program as they were flipping and rotating their designs and spinning them into different perspectives. They were working with real measurements on the program and converting between mm and cm easily. A few students who are often trying to catch up when everyone else is discussing big ideas were in their element on Sketchup. They had figured everything out and were teaching others.

Step 6: Now for reality. It was time to go back to the kindergarteners with their design plans. I remember being away that day but leaving directions for the students to make a plan with Tasha, the kindergarten teacher, to present to the kindies. They brought their paper plans, their Sketchup and took some photos and videos of their discussion. I had them send me photos and videos and some responses. The reality of working with kindergarteners was sinking in. They were hard to please, they realized. They really liked ones that looked cool like an iPad stand that was designed was ears.

Step 7: So next was the actual building of the prototype, and more conversations with the kindergarteners. As one group progressed, they tweeted some questions to the kindergarten class to get their ideas. Another group went and asked them about the design. In retrospect, the students wished they had all asked the kindergarteners about their design ideas as it turned out they liked princesses and Sponge Bob, bright colors and ears, of course. The word, “prototype,” became commonplace in the classroom as cardboard, glue guns, fabric, metal wire spread all over the class so it resembled an art studio instead of a typical classroom. We didn’t worry about cleaning 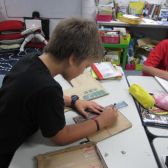 up until the end of the day when the geometry project studio was finished. I realized that during the building stage there wasn’t a lot I could do. The students were occupied. Hands-on. Messy. I watched. Took notes. They really didn’t need me at this point.

Step 8: After a lot of time building, students were ready to run their designs through an industrial design critique. Elif, our IT facilitator, who had worked on design in a past life, listened and watched as each group presented their iPad stand. She asked questions, and by the end of their consultation, the students had some ideas they needed to change. Some stands had pointy objects attached to them that wouldn’t be safe for kindergarteners. Some stands couldn’t support the weight of the actual iPad. Some had forgotten a camera hole. Others needed more pizazz. The students went back to work. They were realizing how laborious the design process was.

Step 9: After fixing their iPad stand covers, it was time to present them to kindergarteners. They made some

marketing materials, and one group even brought down some free origami boats as an incentive for the kindergarteners. The kindergarteners were going to decide on their favorite one, so the students needed to practice their sales pitch. Groups made posters, brochures, boats and they headed down to kindergarten to deal with their 6-year old bosses.

Step 10: The decision and the reflection. 6-year olds are a tough crowd, the grade 5 students learned. They voted and Tasha scribed their comments. “We don’t know where to hold it.” “This is good because it is Ninjago and that is why it is a very cool iPad cover because we like Ninjago.” “It slips out of the cover quite easily.” Final verdict: The colorful one, with a stand that resembles one they might have seen at home, wins! I asked my grade 5 students what they thought of the project when it was all done in a visible thinking routine. Here’s what they said:

Most challenging part of the project: Making holes and making it stand up. The actual building.

Best part of the project: Experimenting, sharing with the kindergarteners, building it, learning about 6-year old kids, Sketchup.

What you could improve next time: Ask about the design. Do a survey of what they like. Measuring. Making it sturdier. Thinking more about shapes.

How was it solving a real problem: Hard because we had to interact with kindergarteners and they’re hard to understand. Had to think about our target audience. Had to deal with measuring, and it had to work.

Overall, I think it went great. In the end, I think it was more about measurement then geometry except that there was a lot of talk about angles. Students were absolutely engaged. It was hands-on. They were using technology as a tool. They were communicating, thinking, reflecting. The inquiry process and design process was in full swing. I would do it again…or something similar to it. Last year, it was teapots. This year, it was iPad stands. We’ll see what next year brings.

I am a grade 5 teacher in a PYP school in Chicago, Illinois, USA. From the US originally, I worked in Asia the last 13 years. I am passionate about inquiry-driven education, collaboration, and ensuring kids get to continue to be kids that play, create and think as long as they can. Outside of school, l love to write, read, hike, run, meditate and travel.
View all posts by kdceci →
This entry was posted in Inquiry. Bookmark the permalink.