Stretching out thinking and slowing down (is less more?)

Posted on September 22, 2014 by Craig
The idea was simple. Give the kids a map, tell them they are part of a tribe of neolithic nomads, and choose the best place to settle. Parameters were set. A story was hatched. 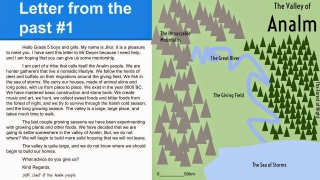 It could have been a nice afternoon. It could have resulted in a good debate, maybe a list of pros and cons. Instead, I stretched it out, made the thinking more explicit. We went slowly, reflecting at each step, asking what we know and what we still need to know.

We teased apart the thinking, stretched it out, and ended up with the following progression of lessons, and a nice artefact to share with our parents and the learning community demonstrating how we inquire:

Things to wonder about… our perception of time spent on tasks

– the process was largely emergent, and was unplanned from step to step. As a teacher I just listened and looked for gaps in understanding, and then tried to fill them. By the end, they were doing it themselves, saying they weren’t ready to make a decision. The extra time spend became a thinking tool in and of itself. Should I have planned something like this out from the beginning? Should I have sat down in a collaborative planning session and created a sequence of lessons like this? Or is the planning time better spent creating the task itself, and leaving the stretching out to the teacher, who is living in the moment with his/her class? How important is learning to listen as a teacher? How can we improve on this skill?

– there are so many thinking skills involved in any provocation that we create; why do we rush from activity to activity? Does the planner leave us feeling like we have to get to every activity we put on there? Does it take our perception of time and shorten our attention spans?

– this took almost two weeks to finish and I admit, while I was spending two weeks on one seemingly simple activity, I felt guilty, like I wasn’t doing enough; why is that? Where does this feeling come from? Does the quantity of tasks we do in a unit equal quality? To what extent should we limit the amount of learning engagements and focus on the thinking involved?

In the end, I regretted nothing. It was a powerful progression of lessons, it was intentional yet emergent, and the kids were completely aware of the reasons and the meta-inquiry behind it all.

My burning question, is less more?

In Kyoto 京都
View all posts by Craig →
This entry was posted in Uncategorized. Bookmark the permalink.

3 Responses to Stretching out thinking and slowing down (is less more?)